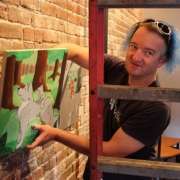 LYNN — It may not have the cache of a Newbury Street art gallery, but the Land of a Thousand Hills Coffee Co. has something just as flashy, a place for teen artists to show their work.

Raw Art Works, the nonprofit whose mission is to put paint brushes into kids’ hands, and the Munroe Street coffee shop have teamed up to present Art Motivates People, the work of eight teens created during a free, six-week summer program.  Read full article… 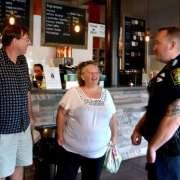 PHOTO BY PAULA MULLER
Jay and Bethany Pike talk with Patrolman Ryan Dulong, of the Lynn Police Department, meets with people at the Land of a Thousand Hills cafe on Munroe Street in on Saturday.

LYNN — Eva Yeno, a West African native and Lynn resident, was curious about the “Coffee With A Cop” event and stopped by the Land of A Thousand Hills cafe to check it out.

“Talks like this help people trust each other more and that’s needed,” said the Lynn Classical senior. “I am going to encourage people at school to come to next month’s meeting and I hope everyone who attends spreads the word that the police are here to help us.”

Five years ago, police officers in Hawthorne, Calif., hosted the first “Coffee With A Cop” gathering to improve relations between law enforcement and the community.

Today, there are programs in all states. The Lynn Police Department held its third discussion at the coffee shop on Munroe Street.  Read full article… 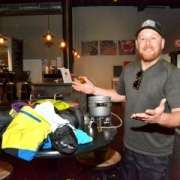 But a special cause inspired him to hike 2,189 miles longer.

Next week, starting in West Virginia, he plans a trek to Maine, and then fly back and hike to Georgia. He will use the Appalachian Trail Guide as his map and hopes he can accomplish the adventure within six months.

Witt has dedicated the hike to raise money for the Haven Project. The Lynn nonprofit helps teens find homes.

“Our goals here are simple,” she said. “We want to get these kids into safe homes and help make them responsible citizens. People like Ian help us make these goals possible. I can’t thank him enough.”

To make the journey, Witt quit his job at Slade Gorton, a Boston-based seafood products distributor and manufacturer, where he has worked since 2007 as a credit manager.

Witt plans to carry a 40-pound backpack filled with necessities, including a fold-up hammock, dehydrated food such as pasta, oatmeal and powdered milk, small bowls, a smaller fold-away gas heater, a six-inch metal shovel and clothes. He will also bring his cell phone and a battery charger. Witt expects to leave the trail occasionally to buy food and charge his devices.

Witt will depend on a state-of-the-art filter system attached to a bottle in his backpack. The device looks like a large flexible straw.

Witt plans to use baby wipes as his daily clean up routine. He’ll bring a bar of soap along, in case he’s lucky enough to find a clean creek.

As the departure day draws near, Witt said he is sad about leaving loved ones behind. He said that his mom, Chris Witt, who lives inSwampscott, was shocked when he first told her about his adventure. But she has come to terms with it and is happy for him, Witt said.

“She’s a nervous wreck, but supportive,” he said. “She knows me and my wanderlust well.”

“I understand that they couldn’t hold my job open for me, but they also told me to stop in as soon as I get back,” he said. “That’s a good sign.”

He hopes to be back home to celebrate his girlfriend’s birthday in November.

Trisha Gomez, his girlfriend of seven years, said she hopes they will talk regularly while he is on the voyage. She acknowledged that she is ambivalent as Witt prepares to leave.

LYNN’S OWN HAVEN OF HOPE FOR HOMELESS YOUTH

Article featuring the Haven Project from The Daily Item

ITEM PHOTO BY OWEN O’ROURKE
Trisha Cole, left, a student, and Amy Velardi, her tutor, work on lessons at the Haven Project on Munroe Street in Lynn.

Located at the top of a steep set of stairs on Munroe Street, the Haven Project is a tough place to find unless you’re a homeless kid who needs to get out of the cold or talk to someone who has answers.

Haven Project has been around since 2011 and Director Gini Mazman said the organization helps 150 kids a year. These teenagers and young adults look like most people between the age of 17 and 24, but their stories are laced with pain and a legacy of few, if any, opportunities.

Mazman said some of the young people assisted by Haven endured abusive situations in their family homes until they escaped or were kicked out. Others are victims of a condition described by state youth workers as “aging out.” These teens are too old to remain in foster care but too ill-equipped for life to live on their own.

Lack of life skills and stability are the common denominators in the lives of youth assisted by the Haven Project. These are people, said Mazman and Haven drop-in center director Emily Urbina, who did not simply fail to learn common sense life lessons — they never were taught basic skills by someone who exercised a strong and loving presence in their lives.

Urbina said skills even their peers take for granted — knowing how to call in sick to a job, showing up on time for school, making an appointment — are absent from the lives of many homeless teens. Because their life-skill tool box is empty, homeless teenagers can’t stay in school and they can’t hold a job for any length of time. Because they can’t get an education or develop a career, they can’t find and maintain a stable living situation, and so the cycle repeats itself.

Haven Project tries to break the cycle, first and foremost, by showing homeless teens that someone cares about their predicament and understands what they are going through. The converted warehouse space Haven Project uses is a carpeted, comfortable place where teens can spend some time talking to people like Mazman and Urbina.

There is one rule in force at Haven — teens can always return to 57 Munroe St. and ask for help, even if they turn their backs on the employment and education opportunities Haven gives them a chance to try out. Urbina said this accepting and tolerant policy teaches homeless teens an important life lesson — they ultimately must be accountable to themselves if they want to break the cycle of homelessness.

Our Volunteer Appreciation event last month was a success!

It was held at our cafe, Land of a Thousand Hills, and featured by The Daily Item. Thank you to all of our wonderful volunteers who attended and heard an amazing motivational talk from Carrie Stack, speaker and life coach from the North Shore area.

We are so thrilled that our cafe, Land of a Thousand Hills Coffee – Lynn, MA is mentioned in The Daily Item’s letter to re-invite the Rolling Stones back to Lynn – we are even listed as their first stop!

“LYNN’S HAVEN GETS A HELPING HAND”

Article featuring the Haven Project from The Daily Item

“We saw a need. The vision was to create resources related to education,” said Metro Credit’s Saritin Rizzuto.

Founded in 2011, the nonprofit organization helps young people 17 to 24-years-old. Executive Director Gini Mazman said many of the youth left abusive family situations, while others are immigrants who parted ways with sponsors who initially helped them when they arrived in the United States.

“They have zero stability,” Urbina said.

Mazman said Haven helps the youth bring more stability into their lives by steering them to education, job and housing opportunities. Homeless teens and young adults climb the stairs to Haven’s 57 Munroe St. offices and work one-on-one with tutors.

“Living and working in Lynn, I have a passion for making the community better,” she said.

Our annual Tennis Benefit was a success!

We were privileged to have over 60 North Shore Tennis Players attend our annual Tennis Benefit at the Woburn Racquet Club! We had an additional 100 people who supported the benefit by sponsoring, purchasing raffle tickets, and providing food or beverages for the event.

We raised over $12,500 from this event on Sunday, May 1st. These funds will support two full months of programming for unaccompanied young adults who come to our drop-in center. Because of your generosity, over 40 young adults will have access to healthy meals, educational support and guidance with employment.

Proceeds from tickets were donated to the event’s beneficiary, The Haven Project, whose “mission is to equip and empower homeless, unaccompanied young adults between the ages of 17 to 24 with the skills and the support they need to be successful and independent,” according to the program.

The Haven Project, a Lynn-based program that helps homeless young adults, will be opening a new café, The Land of A Thousand Hills Coffee Company, on Munroe Street this fall.

The Southern-based Thousand Hills coffee company, whose motto is “Drink Coffee, Do Good,” is partnering with The Haven Project in a social enterprise venture that will give homeless young adults (ages 17-24) job training skills and a position of employment at the café for one year.